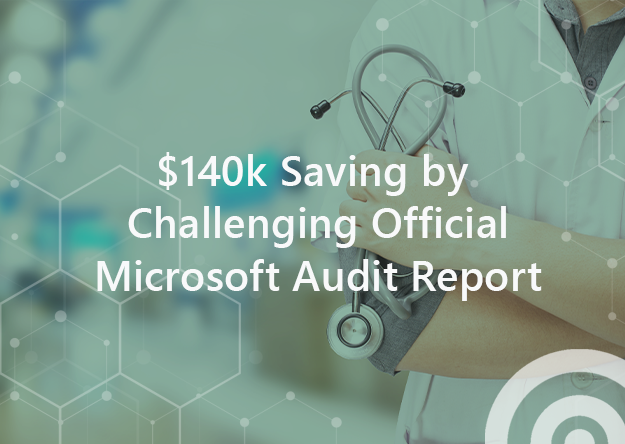 Even the biggest can get it wrong: Independent Audit Defense Service from Certero verifies official auditor report and saves Hospital $140k+ with Microsoft licensing.

When Microsoft instigated a routine software audit with a US Healthcare organization, Microsoft brought in one of the biggest accounting firms in the business to conduct the audit.

Fortunately, the Healthcare organization was a Certero customer and knew how Certero’s technology-led approach to Software Asset Management Services was not only extremely thorough and accurate, but also how Certero maintain an independent stance – preferring to work directly for customers on their behalf, providing a vastly knowledgeable and efficient Audit Defense Service that can be called upon extremely quickly.

The solution proposed was a genuine head-to-head contrast between the Microsoft-appointed auditor and Certero’s in-house SAM team. Certero would establish an Effective License Position (ELP) for the customer but being independent, the customer would remain fully informed and in control of their own data within Certero.

No information would be shared by Certero with either the auditor or Microsoft, instead serving only to empower the customer with required evidence, deep licensing knowledge and sound advice to navigate the risky audit process.

With the Certero for Enterprise SAM solution at their disposal, gaining the depth, completeness and clarity of the fundamental inventory and recognition of all IT hardware and software was not a problem. All Microsoft software deployed was already automatically recognized and categorized into licensable products, versions and editions by the Certero platform.

What was shocking was how different the ELP generated by each organization was, and how it served to demonstrate how important it is to get a thorough, independent view of any potential licensing risks to verify if the auditor has been accurate.

Between the two ELPs, there were major discrepancies that if not verified, the business would have been legally forced to rectify an incorrect licensing exposure of over $145,000. This was due to two main issues:  Certero’s SAM team correctly identified where the auditor had made errors with Windows Datacenter and Windows Server Standard, by failing to grant rights to transition 2-processor licenses to Core-based licenses under an historic Enterprise Agreement. This was not a data-driven error, but more likely a human error made by the official auditor either not having the knowledge, or simply missing the level of detail required to ensure the position was correct. Without Certero’s help, the customer would not have had the knowledge, evidence or confidence to push back.

The auditor also reported a $40,000+ shortfall of SQL Server Standard licenses, despite there being no evidence of the specific version in question being deployed on the customers estate. Furthermore, the customer had an abundance of licenses that would have covered the specific reported exposure. This was possibly due to the auditor relying on bad data from an insufficient inventory solution that has not correctly identified the precise SQL version & edition and then failing to identify that the customer was actually over-licensed for the SQL product reported as a shortfall. In contrast, the Certero SAM team had accurate information to begin with, thanks to Certero correctly identifying versions and editions of SQL, automatically. Other shortfalls and issues highlighted by the auditor were verified as correct by Certero. Throughout the Audit Defense guidance was given around:

This allowed the customer to comfortably position themselves for the best outcome possible in completing the audit and because the ELP was generated within the Certero solution, they can retain the value of the service and maintain a constant, accurate view of their licensing.