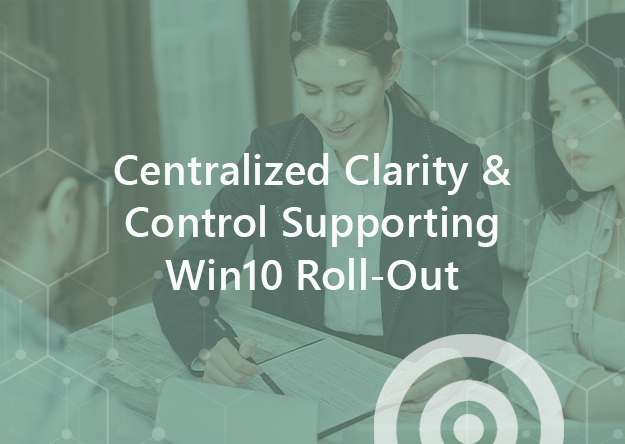 Achieving a 'Single Source of the Truth'

One of America’s largest and oldest publicly traded insurance providers, with more than 9,000 employees across more than 600 locations in North America, Mexico and Europe, partners with Certero to manage software assets across 10,000 desktop devices and 5,000 servers.

No single source of truth

Like many of their peers, the global insurance provider increasingly relied on having a good understanding of its IT infrastructure to be able to support its international business operations. However, also like many IT teams, they had a hard time piecing together information from disparate systems in an attempt to really understand what assets were deployed and being consumed across the organization.

Trying to create a picture of IT assets by triangulating data from Active Directory, SCCM and Anti-Virus tools was proving not only slow, but gave the IT leaders little or no confidence that the results were accurate.

Thankfully, leadership recognized the need for a dedicated Software Asset Management solution, made all the more pressing by both an upcoming multi-million dollar Microsoft renewal and a major IT migration project.

One option would have been to outsource the SAM project around the Microsoft renewal to a services partner. But understanding the wider uses for rich SAM and inventory data, the insurance provider decided instead to invest in bringing on technology in-house, with additional external skills as required.

With its ability to discover and inventory devices across their global IT estate, using both agent-based and agent-less auditing, Certero was a great fit for the insurance provider’s complex environment.

IT leadership at the insurance giant describes two teams of users for the Certero Platform: first, the IT management team that takes care of making sure the Certero platform is running optimally. Then a group of consumers from across the organization including end user computing, data center, information security and cyber-security. This wider consumer group ensures that the Certero platform delivers much more value than a traditional narrowly-focused SAM tool.

While the Microsoft renewal was a key driver for the original purchasing decision, the insurance provider has a multi-platform network and didn’t want a SAM tool that was Windows-centric, so its ability to effectively find and audit Linux devices was critical.

Getting Windows 10 on track

Aside from inventory and licensing, one of the major projects that’s already benefited from the introduction of Certero is the insurance provider’s move to Windows 10. With 10,000 desktops around the world, it’s a major project and is being run by its Infrastructure Project Manager who says that the previous method of getting inventory and employee data from Active Directory and SCCM had hampered, rather than helped, initial Windows 10 migration efforts.

Since deploying Certero, the team has found it much easier to target the machines that need refreshing, to see the status of the migration and to track the roll-out of associated applications like Office 2016. In a short space of time, they’ve been able to complete the refresh of over 4,000 desktops, as well as identify an additional 2,000 that are running Windows 10, but not Office 2016.

Thanks to its ability to understand locations and users, Certero also helps the team plan the upgrades and migrations around the priorities and working practices of different groups, minimizing the disruption to the business.

What the insurance provider had managed to achieve with Certero is just the beginning of a longer-term vision for maturing their ITAM and SAM practices.

To date, they have identified over $5m in license optimization opportunities and the IT leadership already has an ambitious plan for the months and years ahead, which will see the Certero platform play a pivotal role in hardware life-cycle planning, end of life planning for software, creating standard images and blacklisted software and support disaster recovery planning.

The insurer also plans to integrate Certero with its ivanti service management platform.

A successful start to a long-term partnership that still has a lot more benefits to deliver.

Certero are pioneering the new way that ITAM & SAM services can be delivered.

Discovery and Inventory
Achieve full visibility of all computers, servers and other IT assets across all platforms and locations.